Blind Channel on the road for Eurovision Song Contest 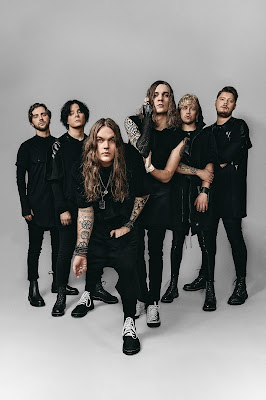 On the night of the 20th of February, Blind Channel won the Uuden Musiikki Kilpailu, with their latest single "Dark Side" . UMK is also known as the Finnish national selections for the Eurovision song contest 2021. The band will now be competing against 40 other acts in the Eurovision contest which will be held in Rotterdam (Netherlands) in May.

For those who might not be familiar with the band, Blind Channel is a Finnish violent pop band formed in 2013, by Joel Hokka (vocals and guitar), Niko Vilhelm (vocals), Joonas Porko (guitar), Olli Matela (bass), Tommi Lalli (drums) and the recent addition Aleksi Kaunisvesi (keyboards).

We got to see Blind Channel perform for the first time in 2016 when they opened for Simple Plan's gig in Helsinki, since then we have been following their journey, from the release of their first album through the third, various singles and performances, both in Finland and abroad. Somehow it fills my heart with so much joy to see these 5, now 6, young boys growing up (musically and not), working hard and achieving so much, and unconsciously being a huge inspiration for whoever is out there working hard towards their dreams.

I guess that back in 2016 when I said they were going to take over the world, I wasn't completely wrong ;).